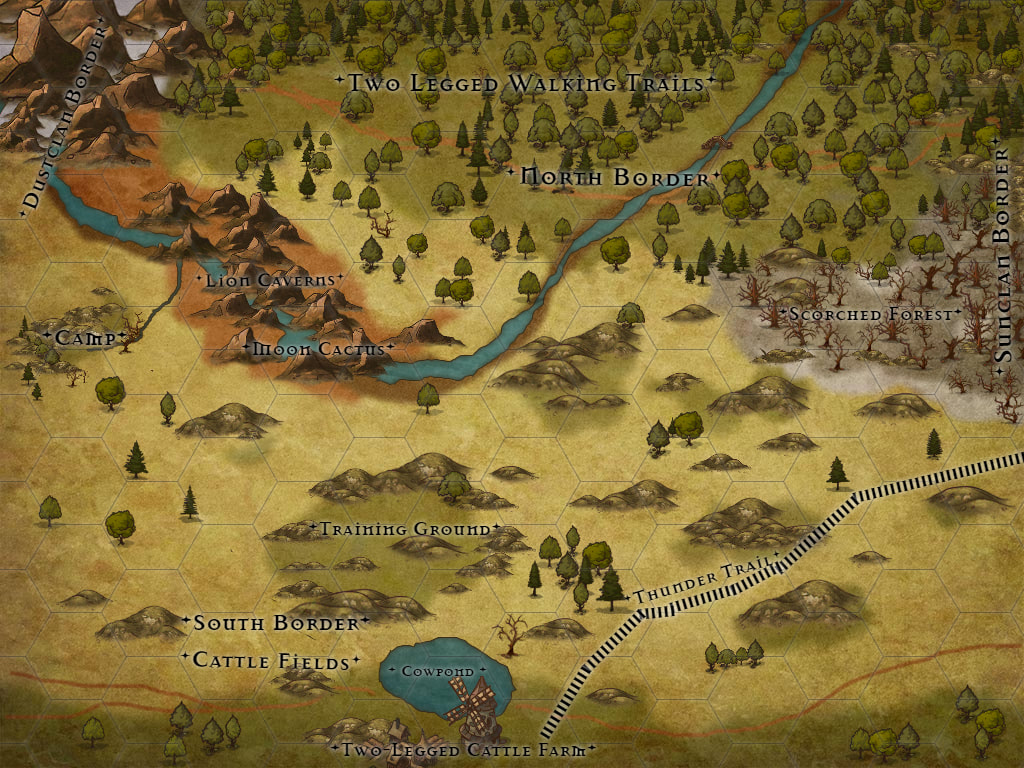 Muleclan territory is a rough terrain of rocks, hills, canyons, and cacti. Their territory is directly beside a two-legged cattle farm. A rugged wired post fence outlines their south border and the cattle field. The south side of the territory is mostly tall yellow grass with trees dotted here and there. A thundertrail goes from the south border to the east border. Along the east border is the Scorched forest.  Most time of the year it is dry and dusty making it easy for the for the sun's heat to cause a fire especially in the east part of the territory. Past the Scorched forest lies Muleclan's neighbors Sunclan. The north border leads into a the forest. Deep in the forest are trails that two-leggeds use often which is why Muleclan cats often stay clear of this area. The west border has a lot of mountains in the northwest region and the clan's camp in centered close to this border. A river runs from the mountains into some canyons that are close to the clan's camp.


Camp;;
Muleclan's camp is found close to the west boarder of their territory. It is found in a small clearing up against the sharp rocky wall of a cliff. The clan cat's call this wall Black Bird's Perch. The rest of the camp's walls are lined with thick bushes and fallen trees. A small stream runs through the front part of the camp providing safe drinking water. The camp floor is full of rocks, dirt, and dead grass. The entrance can be found under a fallen tree trunk and a whole dug out in the red dirt.

Aside from fires breaking out the biggest threat to the clan comes from the canyon caves northeast from camp. These canyons are called Lion Caverns. The caverns themselves aren't deadly to those who know how to navigate through the many tunnels and mineral deposits that create sharp fang looking towers. It is the large mountain lion that lives within the caves that threatens the clan.

South of Lion Caverns you have more canyons and caves that are carved out by the river's water. If one follows the river they will find a small cliff inside a cave that has one single cactus. The cave roof has a whole where sunlight basks down on this singular cactus. During the night the stars shine down so brightly the entire cave sparkles and the cactus appears to be white. This is where and when the medicine cat comes to sit in meeting with Starclan. A cat must prick its nose on the cactus and then fall asleep near it in order to meet with their ancestors.

The clan's training grounds are found in the grasslands part of the territory just north of the south borded. A small ditch between some hills makes the perfect place to train the young cats of the clan. The grass here is softer and the ground is more sandy providing the best training spots.

Cattle Fields and Two-Legged Cattle Farm;;
XX
The clan's south border is lined with grey wooden post, barbwire fences. This fence marks the end of Muleclan territory and the start of the Two-Legged Cattle Farm. The Cattle Fields are mostly just rolling pastures with trees here and there. Cattle herds can be found all over these fields, usually the cattle don't seem to be bothered with the cats if they ever come into contact with each other. Past the fields, more south of the border, is the Two-Legged barn and nest. The farm is where the clan originated from. They prefer to stay as far away from here as possible because the Two-legs have two vicious dogs, Fang and Thorn, that will kill a cat on sight.

On the boarder of the farm and the clan's territory is a little two-legged made pond that the cows are often seen at. The cats will occasionally use this for drinking water but the water is usually muddy and gross. This is a great place to hunt for frogs and snakes.

The Thunder Trail are these wooden and iron trails that go through the clan's southeast territory leading towards the Two-Legged Cattle Farm. Giant monsters ride the trail making noises louder than any other Two-legged monster.

On the clan's south border there is a dry forest. This forest has a bunch of dirt thunderpaths and trails that two-leggeds use. The clan avoids this area as much as possible because two-leggeds are almost always out walking along these trails.