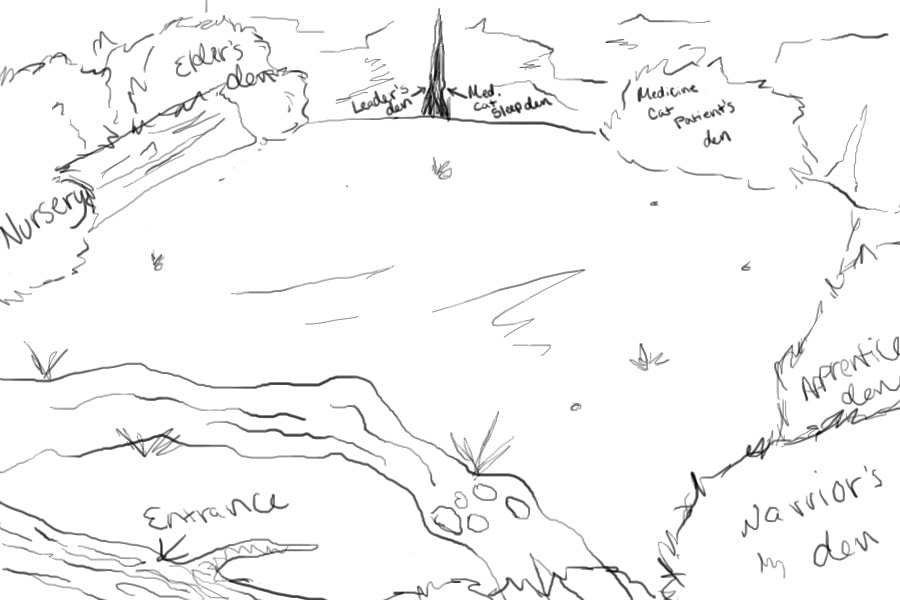 Welcome to the Muleclan's camp. My name is Sparrowpool and although you aren't apart of the clan I guess I can show you around, Mulestar is out anyways.

The clan's camp is northwest of the territory and found very close to border. The clan's camp is hidden in the thickest parts of the woodland. The entrance is very hard to find and only a clan member or a friend can find it. A large oak tree lies across the ground, above the fallen tree overgrown branches and thorn bushes form a wall, beneath the tree dug out of the ground is a hole just big enough that cats can slip through to get into camp.

The camp's clearing is open with rocky sandy flooring. As you walk in you have to watch your step, if you aren't paying attention you might walk straight into the stream that runs through the camp giving the clan easily accessible, fresh, drinking water. Although most cats can bound over the stream that is about a fox length thick, there are some stepping stones.

On the right of the entrance are thick thorn bushes, the same overgrown bushes that rise up over the fallen tree. The base of these bushes make the warrior's den. The den is long and takes up the almost entire right side of the camp. A smaller bunch of bushes right next to the warrior's den forms the apprentice's den which ends at the rock wall that rises up at the very back of the camp.

On the left side of the camp you can find the elder's den in a hallowed out log and some more bushes. It is the smallest den within the camp because not many Muleclan cats make it to the life of an elder. The clan saw it as wasted space. Next to the elder's den on the other side of the log is the nursery. The nursery is a thick bush with old pieces of hollowed out logs for a protective wall.

The leader holds clan meetings at the entrance of the camp where the fallen tree lies a thick twisted branch sticks out and digs into the ground. The leader of clan sits on this branch and looks out at the clan from here.